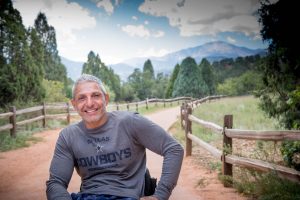 Q: What was the inspiration for the “Roll With Me” concept?

It began by a promise that I made to myself when I was eighteen years old. That by the time I turned forty-five, I will have accomplished something extraordinary. Something that no one’s ever done before, or something that very few people have done before. I didn’t know what that would be, obviously, and being in a wheelchair was definitely not part of the equation. It took me twenty years to figure it out, and rolling was IT.

I felt that I needed validation, to prove to myself that the roll across America was not a fluke. That I was capable of completing a feat that was as extraordinary as that one. I didn’t have anything to prove to anyone, but I felt I needed to prove it to myself.

Q: I noticed there wasn’t any Press covering your event. Why not?

Because honestly, I was not confident that I can finish. Not that I wasn’t confident in my abilities. I wasn’t confident in the fact that did I have enough time? That the thirteen hours that I was given would be enough time to do it. The fact that I didn’t stop smoking, when I know I should. The fact of the elevation and my breathing. Will my shoulders hold up. There were so many factors. That the fear of not finishing, and then having someone come to cover me, to cover the story, and I didn’t finish. Not only would it have been devastating, but to have press come to cover you, and not finish, I didn’t want that pressure on me. Because I had enough doubt to begin with. I trained my butt off. But I didn’t know if everything… weather, if the weather was to hold up. There were so many elements, that had to go right. And I just didn’t want to put myself in that position.

Q: You are the first person to roll Pikes Peak, other than grueling, how was the experience?

No one’s ever done it before, unassisted, in a wheelchair. I can take that claim, as the first person in history to do so. Which is mind boggling, with all the extreme sports out there today, and all the extreme things that people have done, and continue to do, to think that no one’s ever tried to roll up Pikes Peak in a wheel chair unassisted. It’s just mind blowing. It’s either that I’m just that crazy… or… well, I’m that crazy. The thing that I stressed about mostly was not elevation, but breathing. When I flew in to train, the next day I went up to the Ranger, and I asked him if I could train up on the mountain. He allowed me, and I wind up summiting, so I did the last four miles. And I got a real dose of rolling in elevation. And I knew that my breathing was effected the first hour and a half, of that four mile summit. But once I get past that, and I started focusing on my breathing, and just taking deep breaths, after an hour and a half, my breathing leveled out. And I was fine. So that gave me a really great understanding of what to expect – at least for the last four miles. The switchbacks, there are about five miles of switchbacks, they said that is really tough. But overall, it was easier than I thought, I made it up faster than I anticipated, my body held up pretty well. I only stopped twice during the entire roll. I had someone rub my body down during the two twenty minute breaks. So I rolled an actual nine and a half hours. I had a lot of energy when I was done. Of course my adrenaline was pumped. But I put myself through more stress than I needed to. But I didn’t know, and it was a major undertaking.

Q: Can you share any stories of how people responded to seeing you roll Pikes Peak? (teacher?)

You know when they talk about running a marathon? Have you heard about the twenty mile wall? At the twenty mile marker, the crowd gathers to cheer on the runners who have hit that wall, and are ready to collapse. Runners will literally get back up, and finish the race, based on the cheering of the crowds. The adrenaline that you get, from people cheering you on, you can’t put a price on it, and you can’t underestimate the energy that it infuses into you. So when I’m rolling, and people stopped, waved, or honked a horn, that was just like another shot of energy boost. When I was rolling up the mountain, people were taking video of me, people were taking pictures, people were yelling “you’re the most inspiring man I ever met”, “you’re superman”, “you’re crazy”, “you can do it”, “you’re unbelievable”, “you’re inspirational”. People stopped me and would just literally have no words or they just couldn’t believe it that I rolled as much as I did when they saw me.

I’m rolling, there’s this one teacher, I can see her car parked, I can see that she is sitting in the car trying to be inconspicuous and take pictures. Trying to not make it look obvious she’s taking pictures. It doesn’t matter to me, so I kept rolling.  Twenty minutes later, I see her again. And she’s doing the same thing. Trying to hide the tablet, which she is using to take video of me. I waved, she waved back, and I kept on going. Then I saw she drove past me, to go up the mountain. Then a couple minutes later, I see her stopped again, doing the same thing. So I went up to her and said “Hello, thank you so much for what you’re doing. I can really feel the support from you, it means a lot to me”. And she said “What you’re doing is incredible, it’s so inspirational. I’m a second grade teacher, and I want to show this to my students”. I was overwhelmed. Like a heart warming sensation came over me. Her response is exactly why I do it. I put it all on the line, I risk everything, for that. So I can affect people.

A guy came up to me and said, “Can I just shake your hand? I think you are the most inspirational person I’ve ever met in my life. I’ve been wanting to summit Pikes Park on my bike, for years. I’ve been afraid, I’ve been two hundred and fifty pounds, so I lost one hundred pounds. And I have been afraid to do it, and I’m telling you, because of you today, because of what you’re doing, I’m challenging myself. And by next July, I’m going to summit Pikes Peak on my bike. And that is solely because of you.” And he started tearing up, and his wife started tearing up.

A lot of people ride their bikes up the summit, and they struggle. One guy was riding his bike really slowly, and he goes, “I want to thank you. I was ready to stop, about two miles ago, I was done. But then I saw you, in your wheelchair, and I said there’s no way I’m going to stop if this guy is going to wheel up to the summit. And because of you, I’m going up to the summit.”

That’s why I do it. And that, to me, is the greatest feeling in the world. That you can have a positive affect on someone, that will make them go out of their comfort zone and challenge themselves, when they feel they want to quit. That is the greatest gift that I can give to any human being.

Q: Will you be posting any video from this experience on your website?

We took video with a good camera, and we’ll see what the footage looks like, and if I could put something together. I would have to interlace the moments with additional footage of me talking about what was happening and what I was going through. So if we do something with the footage, it will be a short. But if we get a chance to do the Death Valley roll next July, then I’d like to put something together using both of those experiences.

Q: Now that you’ve rolled Palestine for peace, America, and Pikes Peak, would you ever consider writing a book regarding your experiences?

I have considered writing a book. I’ve been thinking about writing a book for a long time. More than anything, I’m intimidated to write. It’s more intimidating than any of the rolls. I started to write the book, I have a few pages that are already written. More like page outlines, than edited finished pages. I don’t think I have the skillset to do that. I’m sure I could learn it and figure it out, but because I’m too close to it, there’s too much self editing. And that’s probably the thing that’s most hindering to the process. Because I’m so obsessive, it’s hard for me to just write, without going back, and go wait, this sounds better. And then I change it, and it doesn’t sound that good. So I have attempted it. The book is going to come, my story isn’t over yet, I think I have one more chapter in my rolling.

To roll Death Valley, if I can get a crew to commit and if we can secure the funding. Because I can’t get it out of my mind. I’ve wanted to roll Death Valley for two years. Once I complete that, I think I’ve done everything I possibly can in the United States.

Q: How can people find you, get updates, and reach out to you?

Photographer, media creator, painter, and father. Bringing people’s dream projects to fruition. With a deep love for film, music, coffee, and the arts.