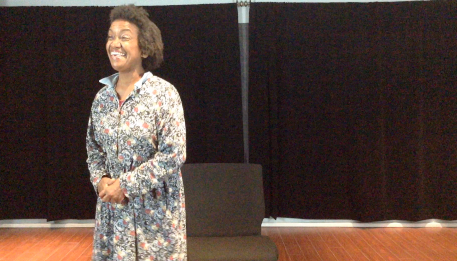 Diana Elizabeth Jordan likes to joke that she was “meant to be an actress” because she entered the world in high dramatic fashion. Her doctors worked on her for 45 minutes before she started breathing on her own. Diagnosed with cerebral palsy (which mildly affects her speech and gait) around age 2, Diana grew up conquering adversity and not letting anything stop her from pursuing her dream of being an actress.

She began her acting career in Chicago after graduating with a bachelors’ degree in Theater and Media Arts from the University of Kansas. In 2001 she became the first actress with a disability receive a MFA from California State University Long Beach Throughout her career Diana has been determined to not be limited and to not be cast in only disability-specific roles. Diana has appeared in over 30 plays, The WB’s 7th Heaven, FX’s Legit and a web series The Hollywood Acting Class. Her film credits include the award-winning films Rule of Three, The Young and Evil, The Miracle Maker, Last Ditch Therapy, Imaginary Circumstances, One Score and 17 Nights, and the upcoming film Brad’s Untitled Winter Documentary.

Diana is also an acting coach and artist educator. She is dedicated to gently motivating her students to expand their comfort zones and has taught acting workshops to youth and adults. She’s spent over 15 years as one of the resident acting coaches at Performing Arts Studio West which provides hands-on individualized training, career management, and on location support for performers with developmental disabilities working in film, television and commercials. Her students have been featured in theater award winning films and television.

As an activist she advocates for disability to be included in dialogues about multicultural diversity and inclusion in the entertainment industry. Diana serves on the SAG-AFTRA Performers with Disabilities National Committee and she was one of the 2011 co-chairs for Inclusion in the Arts and Media for People with Disabilities Campaign – a national civil rights and public relations campaign sponsored by the SAG-AFTRA and The Actors Equity Association. Diana has committed her career to entertaining and ensuring disability is a visible part of The American Scene.

Diana resides in Los Angeles where when not acting she enjoys playing her favorite role Aunt Di to her adorable nephews James Wesley and Jordan Gregory.

What Audiences Are Saying About Watch Your Head

“Diana’s performance of Watch Your Head make one believe in the power of live theater.”
~ Peter

“It felt like she was telling me her life story.”
~ Chris

“Diana can move one to tears and laughter, sometimes at the same time.”
~ Rayshell

“Diana is a powerful and captivating actress. She shines in the piece.”
~ Shannon