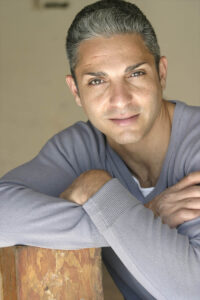 Born in Tripoli, Libya, under a dictatorial regime, Gabriel (birth name Suheil Aghabi) and his family migrated to the United States in 1976, via Ellis Island, and made a home on Long Island, New York. By the age of 15, Gabriel was managing the family business, but knew what he wanted to do for the rest of his life. Become an Actor!

Unknowingly, that decision would change the course of his life forever. On October 17, 1992, only 1.5 miles from home and driving to his first professional audition for Vidal Sassoon, Gabriel was T-boned on the drivers side of his Jeep, ejecting him from the vehicle, smashing his back against a telephone pole, and crushing his spinal cord leaving him paralyzed (T6). Since then, Gabriel has gone on to become one of the busiest models and actors on the east coast. Some of his commercial and print credits include Maxwell House, IBM, Pizza Hut, Blue Cross, Microsoft, and Nordstrom.

In 1998, Gabriel moved to California and continued working as an actor, guest starring on Dexter, Numbers, Joan of Arcadia, and Bold and the Beautiful. In 2003, He won the ABC Talent Development Program for Best Drama.

Gabriel’s greatest achievement came in 2013, when he made history by becoming the first person to roll a regular standard wheelchair across America – 3,100 miles, through 13 states, in 99 days. His journey was documented in a full feature film, Roll With Me, A Journey Across America, which is now showing on Netflix (https://www.netflix.com/title/81024500). In 2014, he went to Israel and rolled his wheelchair from Haifa to Tel Aviv, in the name of peace between the Palestinians and Israelis, “ROLL FOR PEACE”!!!

Gabriel always believed “my accident was an accident, but it wasn’t by accident.” It took him twenty years to finally figure out why this happened and what his PURPOSE in life is: To inspire and motivate people through his actions.