GySgt Popaditch is a decorated military hero and family man. From his mid-western roots 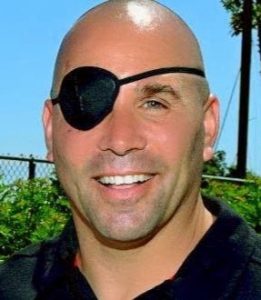 in Terre Haute, Indiana, he enlisted in the United States Marine Corps in 1986 and reported for recruit training. His graduation from recruit was just the beginning of a journey which was to take him to Fort Knox, Kentucky; Camp Pendleton in Oceanside, California; and two deployments to Okinawa, Japan, where he graduated first in his class as a Tank Commander and was proud to be given the promotion to Corporal.In August 1990, Cpl Popaditch was transferred to B Company and deployed to Saudi Arabia. During Operation Desert Shield, he was assigned as Tank Commander of Bravo 2-2 and promoted to the rank of Sergeant. During Operation Desert Storm, Sgt. Popaditch commanded his tank through breaching operations of two minefields and numerous offensive operations against Iraqi forces as part of Task Force Papa Bear.Although honorably discharged in 1991, Nick returned to service in 1998 and in 2001 joined the 1st Tank Battalion and was assigned to B Company as a Platoon Sergeant. He was deployed to Kuwait during Operation Iraqi Freedom and commanded his tank through numerous offensive operations against Iraqi forces. Following the fall of Saddam’s Regime in Iraq, he participated in security and stabilization operations on the streets of Baghdad. In July 2003, he returned stateside.

In the fall of 2003, Sgt Popaditch volunteered to return to Iraq and was promoted to the rank of Gunnery Sergeant. His platoon was assigned to combat duty in the city Fallujah. It was on 7 April 2004, that GySgt Popaditch would be wounded and change the course of his life. Nick was wounded during a firefight with enemy insurgents. He was struck in the head by an enemy Rocket Propelled Grenade which was fired from a rooftop into the commander’s hatch of his tank. He received numerous shrapnel wounds to his head and neck. His right eye was removed and his remaining eye was legally blind. His right ear and nose sustained significant damage and an implant had to be placed in his skull.

He has written a book, Once A Marine, the story about his career and the life which was to follow. Today Nick is a sought after speaker at corporations and on college campuses. After all of these heroic experiences the real test is just beginning as he plans to return to college to become a teacher.